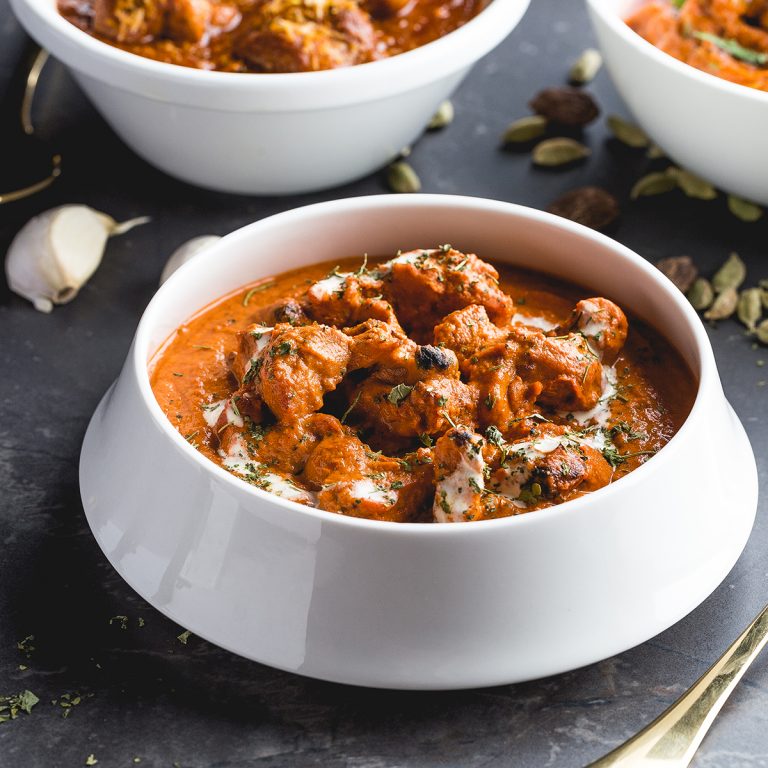 Butter chicken – two simple words to describe one of the richest of Indian dishes. Succulent chicken pieces wrapped in an utterly butterly combination of cream, tomatoes and aromatic spices, this composite dish is a culinary star that tickles palates across the world. Known as murgh makhani in Hindi, it is also one of the most popular Indian dishes recreated around the world. While this iconic dish remains a much-loved favourite on Indian restaurant’s menus across the world, only few know about the humble and practical origins of the butter chicken.

So how and where was the decadent delight called butter chicken first created?

The genesis of the original butter chicken is inextricably tied to the evolution of another gastronomical hero, the tandoori chicken. The origins of the latter lie in Gora Bazaar in Peshawar, where nearly 100 years ago, a man named Mokha Singh Lamba started a small restaurant. The restaurant’s young chef Kundan Lal Gujral decided to experiment by skewering yoghurt marinated pieces of chicken and sticking them into the tandoor (which was previously used only for breads). Thus, the incredibly popular, ubiquitous tandoori chicken was born.

Cooked in the radiant heat of the clay tandoor, fragrant and flavoured by the smoke rising from the hot coals, the version Gujral made with crispy skin and a recognizably bright red exterior became an enormous success until he was forced to flee Pakistan during the 1947 Partition of India.

In his new home in Delhi, Gujral founded a new restaurant, Moti Mahal. The refrigeration facilities or lack of thereof at that time led to Gujral having to innovate again to avoid wastage, especially that of the unsold tandoori tikkas. He deduced that a tomato gravy, lush in butter and cream, would soften his leftover chicken and served it as such. The combination proved to be a masterstroke and thus, by accident or an act of genius, the butter chicken was born.

The trick behind this mildly spiced recipe lay in getting the temperamental combination of tangy tomatoes and rich dairy textures right. And Gujral had got it just right, creating a dish destined for gastronomic glory. Interestingly, buoyed by the fantastic response he got for this dish, Gujral went on create the dal makhni, another gem of a dish that follows similar culinary principles.

In its 1950s heyday, Gujral’s Moti Mahal was extremely popular with celebrities and world leaders, including Zakir Hussain, Jawahar Lal Nehru, Richard Nixon and John F. Kennedy. Freedom fighter and independent India’s first education minister, Maulana Azad reportedly even told the Shah of Iran, Mohammad Reza Pahlavi, that while in India he must make two visits – to the Taj Mahal in Agra and the Moti Mahal in Delhi. And the Shah followed his advice, adding his name to some of the most renowned patrons of Moti Mahal.

In its more recent times, Moti Mahal was visited by none other than renowned master chef Gordon Ramsay, who even went behind the counter in the kitchen of this really old restaurant.

The sinful aroma of Butter Chicken lies in the skilful balance of tanginess and the velvety texture. According to Ayurveda, any rich preparation should be balanced and hence a touch of bitter fenugreek and garlic is added to control acidity and balance the richness of butter & cream. And that’s the uniqueness about our Butter Chicken at Indian Palate. Though food experts feel that the chances of getting it wrong is quite high as many versions are either too spicy or too sweet that spoils the USP of the dish, our butter chicken is known for the rich texture of butter and cream and an optimal balance of tanginess of tomatoes, best served with butter naan. Relish this dish with your loved ones from one of the best Indian Restaurant’s in Budapest.

DAL MAKHANI – QUEEN OF ALL DALS!